On Memorial Day 1926, Adelbert Bailey donated an important item to the Field Memorial Library in Conway.  The aging Civil War veteran gave the library the bugle of his departed friend Homer Fisher, principal musician of Company D of the 31st Mass. Volunteer Infantry.

Homer Fisher was 26 years old when he enlisted in December of 1861. He was a resident of Amherst, then, and a carpenter by trade. After the war, he apparently moved to Conway and was a member of the 31st Massachusetts Regimental Association, a veterans group that organized the regiment’s reunions and collected narratives for a unit history that was never published. The bugle, which had seen service, not only in the Civil War, but in the Boxer Rebellion and the Spanish-American War, as well, was given to the Regimental Association by Fisher. 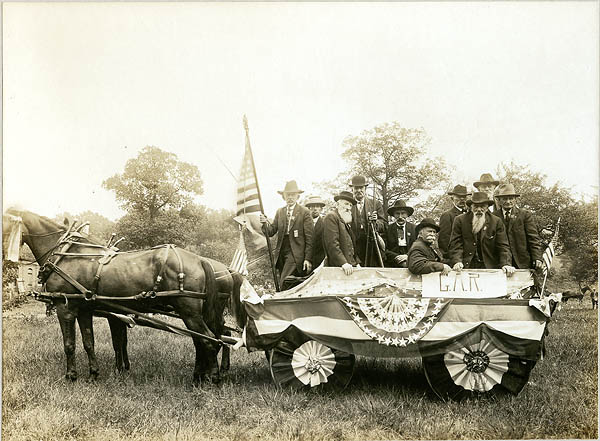 Adelbert Bailey with with G.A.R. comrades, taken during Williamsburg’s Old Home Days celebration in 1915. (Image used by permission of the Williamsburg Historical Society.)

Adelbert Bailey was also a member of the Regimental Association and was one of its last surviving members. A sergeant in Company C during the war, Bailey was a Conway resident and a tanner by occupation, when he enlisted as a 19 year-old. After the war, he married a woman from Williamsburg and relocated in that town. He was active in Williamsburg affairs until his death; he was the last Civil War veteran in that town.

Conway provided at least 16 young men to the rolls of the 31st Mass. Volunteers. So in 1926, with the old veterans dying off and the Regimental Association dwindling, Adelbert Bailey donated his friend’s bugle to the Field Memorial Library (there was no Conway Historical Society, yet) “where it is to be kept among other articles of historic interest,” according to the Springfield newspaper that reported the story at the time.

Today, as we remember the veterans of the Civil War, and those of the 31st Mass. Vols., in particular, the bugle has gone missing.  The Conway Historical Society would love to locate it for their current exhibit. The good folks in Williamsburg have not heard of it.  The librarian at the Field Library says, “This is a library; we don’t have that kind of thing, here.” There was a time, according to several Conway residents, that many such items were on display in the Town Hall, but there was a fire.  The bugle may have been a casualty of that conflagration, but no one knows for sure.

If anyone has more information on the missing bugle of Homer Fisher, we would love to know about it.  Please leave us a comment.

One thought on “So, Where’s the Bugle?”