Poem written by John Milton Black, the Searsville Bard
(This tribute to Adelbert Bailey was read at Memorial Day exercises in 1931.) 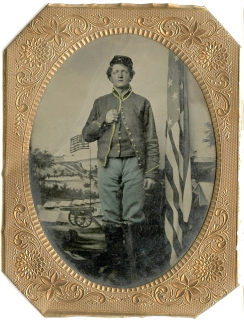 THE LAST OF THE RANKS

He stands alone in the line today
And only a soldier stands that way
Though all his comrades now are gone
His stout heart keeps him marching on,
A soldier for the flag he loves.
He will, by laugh and jest,
Hide from careless, prying eyes
The tumult in his breast.
But a tear must fall to the earth beneath
As he thinks of that last new laurel wreath,
Then smiles to himself and says, “Ah, well!
They’re safe in heaven, – they’ve been through hell.”
And his eyes grow bright as he hears again
The distant bugle call to him;
But the light in his eyes is the light of love,
The sword in his hand is a turtle dove,
Though the scar in his heart is a bullet crease,
The prayer on his lips is a prayer for peace.

Our love goes out to this aged man
Whose hair is white as snow,
But whose heart is as young
As the day he sprung
To the colors long ago.

Local Civil War veterans of the Grand Army of the Republic ride in a parade during Williamsburg’s Old Home Days celebration in 1915. Only two men are identified: Adelbert Bailey, holding the flag, and Henry Bisbee, second from right in the rear. (Image used by permission of the Williamsburg Historical Society.)