Incidents of Soldier Life in the 31st Mass. Vols.
Given by David T. Remington, Corp. Co. B. 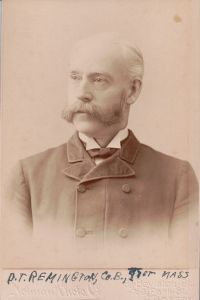 On the east side of the river, as I remember it, we were quartered in a cotton gin opposite Donaldsonville. There was a small party of [us] started out one night from Companies B & E. We waited until after tattoo, and then started out on a little foraging expedition, all of us being very hungry. We reconnoitered [sic] the country to ascertain if there was anything left that had been accidently overlooked. We went out to a place known as the “French Settlement”, on the Amite river, about ten or fifteen miles back from the Mississippi river, opposite Donaldsonville where the camp was. While we were the first Union soldiers that had been at that place up to that time, we knew from hearsay that it was a general rendezvous for certain Confederates, or as they were termed “guerillas”, and being a little cautious about entering the town, we took the necessary precaution to have everybody in the party armed, one with his bugle and the rest with the usual equipments.

There were four in the party, including the bugler, and arriving at the outskirts, the bugler sounded the advance lustily and the forces advanced in order that we might take the town, which we did, and succeeded in capturing a lot of chickens and hams and one large roll of calico, the first that we had seen since we left the dear “Old Bay State.” We also got quantities of other articles, such as a set of bits, bracelets, one-half dozen silver knives, and some other articles not worth mentioning, which were brought away as a reminder of our first visit to this noted place, the headquarters of what desperadoes there were in that section of the country.

We had no desire to hold the town any length of time, and therefore, commenced our retreat in good order, desirous of reaching camp at the earliest possible moment, which would make it about 12 o’clock. We had made about five or six miles of our journey, and it being a bright moonlight night, we became conscious that we were being followed by a party of horsemen, and not being anxious to ascertain whether they were friends or foes, we increased our speed somewhat; but we found out very soon that the party was gaining on us rapidly, and we then increased our speed to the utmost, and after some four or five miles of hasty retreat, we still could see our pursuers were gaining on us, and occasionally, we could hear that peculiar sound of the minnie [sic: Minie] ball as it went whistling past. In our haste, we did not have time to consult deliberately, but we were of the opinion that we had got to abandon our horses and run the risk of swimming the bayou. But knowing of a certain bridle path where there had been formerly a bridge across the bayou mentioned above, we decided, if we could reach that point, to undertake to lead our horses over a stringer that we knew to be left, feeling that we could cross it, and it was the only hope we had of not being run down.

We reached the bridge, dismounted, and proceeded to lead our horses across, which we did with safety, and when once across on the other side, we held the key to the situation, for we were then within three miles or so of our headquarters, while it would be necessary for our pursuers to ride from five to seven miles in order to cut off our gallant retreat, or else hazard themselves in attempting to cross the bayou at the point where we did, on the stringers of the bridge. The bridge consisted of three stringers of timber, partly hewn and perhaps fifteen feet long, they were laid parallel, with an extreme width of six or eight feet, the timber covering having previously removed.

After once feeling ourselves comparatively safe from our pursuers, we thought it best to hold a council of war to decide what was the best move to be made next. Our pursuers were right upon us when our last man got across the bridge. We were in the woods and our pursuers were in the open field. We had to go ten or fifteen rods, after we crossed the bridge, before reaching the woods. While we were holding a council of war in the thickest of these woods, which was fortunate for us at the time, our pursuers, we supposed, were holding another council on the other side. They were about twenty in number, possibly more. At this point, we opened fire on them, which terminated their council, and they immediately adjourned their meeting, none of them attempting to cross the bayou at the risk that we had taken. We then commenced our return to our camp, which we did with safety. We stopped an hour or two outside and unsaddled and cleaned our horses in the best way possible, that we might return to camp in as good order as we had left it. We reached camp just at reveille. After the roll call, we proceeded at once to arrange for a hearty breakfast, which we enjoyed immensely, to the wonderment of some of our comrades at the rations we had been privileged to draw from the Quartermaster, and of which they had been deprived, as they had to put up with salt pork and hard-tack.

There was another expedition that we of Co. B. had while at this camp. This camp was particularly noted as the headquarters of different raids that were made along the Mississippi river. One night, when all was quiet, there was a party, not larger in number than three, started out to reconnoiter, that we might be more familiar with the country and be of greater service to our officers in case we were called upon at short notice. Capt. Bond once said, “How in the Devil do you know anything about this place, never having been here before? I have been here longer than you have, and do not know anything about it.” One night during an expedition, we came to a plantation that had every appearance of being in a very prosperous condition, and on it found several beehives filled with honey and the bees in thorough working condition. We proceeded to dig a hole in the ground, and after filling this hole with cotton, we managed to get one of these hives and set it directly on the fire, and the smoke stupefying the bees, we had no difficulty in procuring for ourselves a most magnificent hive of honey, which after some difficulty, we succeeded in taking back to camp with us. We also were fortunate enough to find some early onions and a few heads of lettuce, also a strip of bacon, and this made our breakfast, which was very tempting and palatable.

We made three visits to these bee-hives at different times and succeeded in carrying back large quantities of honey, which went a long ways in strengthening our weak, physical condition, making us better able to render vigilant service for the cause in which we were enlisted. Complaints were made by the occupants of the plantation to the officer in command of our camp, that raids were continually being made on their property by his men, but he protested that such could not be the case; that he did not have a man in his command who was not honest. Strict search was made in all of the quarters that the men occupied, but nothing was found that could be identified as coming from that plantation. One night, after complaints had been made, we decided that we wanted some more honey, and not daring to smoke the bees, we took the hive to the river and drowned them out, except a few who were left with sufficient life in them to use their business ends freely when we came to take out the honey.